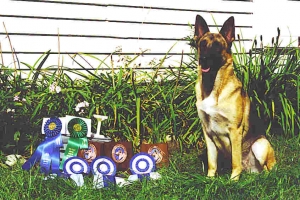 Anya died on a cold and damp December afternoon. She told me it was her time. I held her tight when the vet helped her along. This was not a dog. She was protector, teacher, counselor, co-pilot, mentor, mother, grandmother, great-grandmother, Jack’s girlfriend and – without question – the best friend I have ever had. She stole my heart at age 24, helped me raise my two boys, and left me much, much too soon. 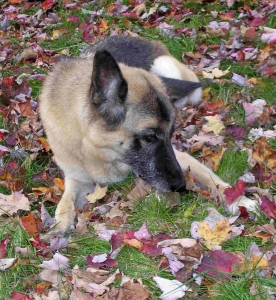 She is my gray ghost, a shell of the strength and fearlessness she was once renowned for here in the Northeast. Her face is heavily salted, except for the jet black eyes that stare off to places I cannot see.

We play fetch with an over-sized stick on a rare warm autumn day. She suddenly abandons the game in favor of a long-neglected marrow bone, covered in damp earth.
She can keep it.
Whatever harmful unseens may be growing inside that bone can do no more damage than the nameless illness her body has taken on.
Her once rich black and red coat, long ago faded, is now stretched over what little remains of her fiber and muscle. Her teeth, nubs in aged black gums, gnaw the bone with intensity. She smells of death.
Today, she is young, lying in the warmth of the sun s rays on a sparse carpet of maple leaves.
We are a pair. She with her bone and gray face, dainty paws firmly holding her find. Me, in my familiar sweatpants, hair unkempt, with red and swollen eyes.
The camera catches her among the foliage on what remains of the green lawn. She will not look at me.
I sit in awe, absorbing every feature of this 50-pound creature who taught me so much about life. But I cannot bear her lessons on death   not yet.
Each day begins with her insistence that the time is near. She cannot eat without a stoic endurance that fails me. Her rear footing is tenuous. There is nothing that can be done, except to wait.
And she is patient.
Often now, I think about the past. Her first litter (and my second) when she taught herself how to open the refrigerator while I was at work. The day she helped eat my very expensive couch. That CDX, yet another first place and a 193.5 out of 200. I sobbed with pride on that sunny morning in Maine so long ago.
And too soon, those tears will run fresh and that vacant look I catch in her eyes will be in mine. I will rock in my chair and look out the window at the legacy of paws and muzzles she left behind.
Washington Irving has a famous quote that appeals to me today:
There is a sacredness in tears. They are not the mark of weakness, but of power. They speak more eloquently than ten thousand tongues. They are the messengers of overwhelming grief, of deep contrition and of unspeakable love.
Some things you know about yourself, unquestioningly: A fitting tribute such as this will fail me in the next few days, when my beautiful girl finally forces me to say goodbye. I share them with you now, while she sleeps nearby, content with her new found bone and my presence. 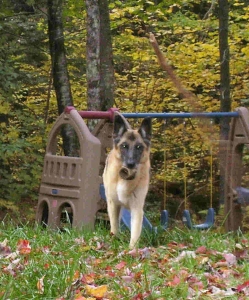 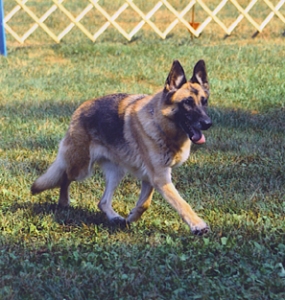 “Anya” is my version of the perfect GSD. She is my best friend, companion and the ULTIMATE working dog. Her enthusiasm never tires – a fact that was proven to me when she finished her CDX in the U.S. and her CD in Canada the following weekend. Anya was shown three times in Canada during 2000; her scores ranked her 14th in the country.

She is now retired, spending more time lounging on the sofa and less – thankfully – getting into trouble. Visit KK to see what she passed on to her progeny, or Geronimo and Pandemonium, her grandkids. 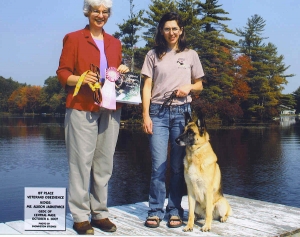 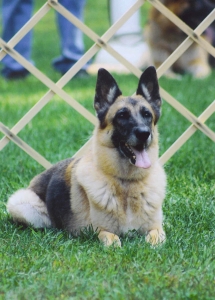 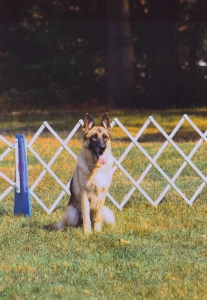 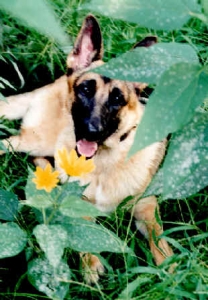 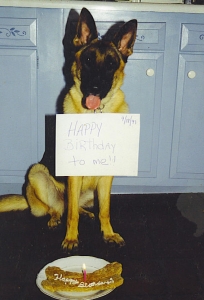 Hiding in the flowers, August 1998