You are here: Home / Invisible Fencing

The following story is TRUE. While it is an extreme case, it is also the perfect example of what GretchAnya has been telling puppy buyers for the last decade: DO NOT use an electric fence. We will no longer sell puppies to homes where an electric fence is to be used. NO EXCEPTIONS.

Why we will NOT sell our puppies to homes with Invisible Fencing.

I have never been a big fan of Invisible Fencing, but today I am sick at heart. Images of a young girl with blood dripping from her face, of another young girl opening her front door to discover the body of her dog laying on her front yard as well as the sound of the shot from the police revolver that killed the dog haunt me.
Like many of the homes in our area, our neighbors had decided to use invisible fencing. The boundary ran nearly to the sidewalk on one side and the road on the other side of the home. The owners had very carefully trained their dog to respect the boundary and although we no longer used the sidewalk when walking our own dogs past the house, we never saw the dog cross the boundaries – only bark and charge up and down the length of the yard.
Unfortunately, Invisible Fencing doesn’t prevent anyone – human or animal – from crossing into a yard so protected. A child might think twice about opening a gate to enter a yard fenced by “visible” material, but most won’t think at all before stepping a few feet onto someone’s grass. Most folks might think twice about crossing a whole lawn to enter someone’s backyard, but who thinks about stepping one or two feet off a sidewalk?
So yesterday afternoon, on the way home from school, one of the children in the neighborhood who knew the dog well stopped to say ‘hello’. He walked onto the grass to greet the dog. He was accompanied by a girl who adores dogs and she, too, walked into the yard to greet the dog. Then, the girl bent down to kiss the dog. And the dog bit her, tearing her lip badly.
The girl’s mother called the police and an ambulance. One of the policeman saw the girl covered in blood while her mother screamed “That dog tore her face off”. The police then went to the house where the dog lived. 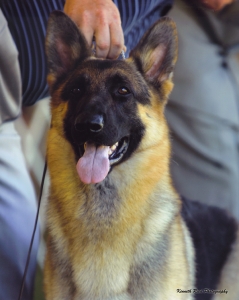 The dog was protective of his property, knew he had done something wrong and also knew the police were acting in a threatening manner. He growled and
menacingly charged the police; but never ever crossed the boundary of his yard.
He was standing in the middle of the yard when the policeman shot him.
Shortly after, the young teenaged girl who lived there realized something was going on and opened her front door only to find the dog’s body with police cars in the street and police standing in the road.
You could say that no one should ever approach a dog they don’t know.

That no one should ever put their face close to a dog they don’t know well.

That no one should ever enter another person’s yard without their express permission and in the owner’s presence.

You can argue that the police should have waited for Animal Control.

You can argue that the dog was a Mastiff mix, that the police considered it a bulldog and dangerous.

You can argue, as do the neighbors who knew the dog well, that the dog was actually just a big loveable teddy bear of a dog.

You could argue that the dog was large, looked mean and threatening, as large dogs frequently do.

You could even argue that Invisible Fences don’t always work – as the police believe happened in this case. However, my husband was working outside and saw the children inside the yard.

Each of those arguments have some truth to them. But what you can’t argue with is that Invisible Fencing is basically no protection at all, especially when it is run up to your property lines.

It doesn’t protect your dog from animals entering the yard. It doesn’t protect your dog from humans entering the yard. It leaves your dog to do the protecting. And while that little girl, now awaiting plastic surgery, might have petted a dog through a “real” fence and still been bitten, it is doubtful that it would have been her face that was damaged. It is also doubtful that the police would have felt they needed to shoot the dog on the spot if it had been contained by a “visible” fence.
I am writing about this tragedy primarily for the rescue community. I give all of you permission to print it and put it into the packages you give your adopters, to warn them that Invisible Fencing may be cheaper than ‘visible’ fencing but it might not be so cheap in the long run!! To beg them that, if they must use it, to at least limit the area to just their backyards, not to run it to their property lines.